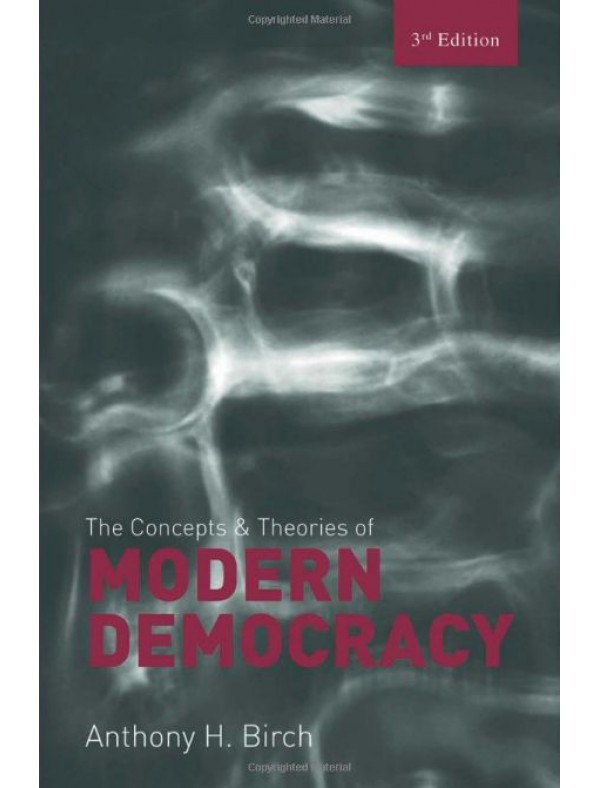 "This new third edition of Tony Birch's The Concepts and Theories of Modern Democracy provides a lively, readable, and unfailingly interesting introduction to the problems and promises of modern democratic theory and practice. With its detailed discussion of terrorism and of the difficulties facing anyone who wishes to plant democratic seeds in alien soil, the text is as timely as today's headlines." -Terence  Ball, Arizona State University, USA

"The third edition of Professor Birch’s book will be welcomed by the scholarly community. This is a mature, comprehensive and balanced reflection on the current state of democratic theory, which is sorely needed as we move rapidly into the 21st century. Professor Birch has been working on democratic theory for many years now and the present volume forms a rich and comprehensive introduction for contemporary students of politics. One major advantage it brings is that the study has far deeper intellectual roots in the discipline of politics, as it formed over the 20th century. This is a distinct advantage over the average introductory texts on democratic theory. The student will be able to grasp many of the key themes and issue of democratic theory in a much more intellectually satisfying disciplinary format. The third edition has been thoroughly updated to include comparative material on terrorism, multicultural and nationalist theory and the recent complex process of democratization." - Andrew Vincent, Sheffield University, UK

This highly acclaimed and popular academic text is now available in a new edition, having been revised and updated to cover the analyses of the use, abuse and ambiguity of many essential concepts used in political discourse and political studies. These include basic concepts such as liberty, democracy, rights, representation, authority and political power.

New to this edition are three sections of great topical interest:

Concepts and Theories of Modern Democracy is a stimulating guide to current world problems as well as essential reading for foundation courses at first or second year level such as elements of politics, political concepts and ideas and fundamentals in politics.

Concepts and Theories of Modern Democracy