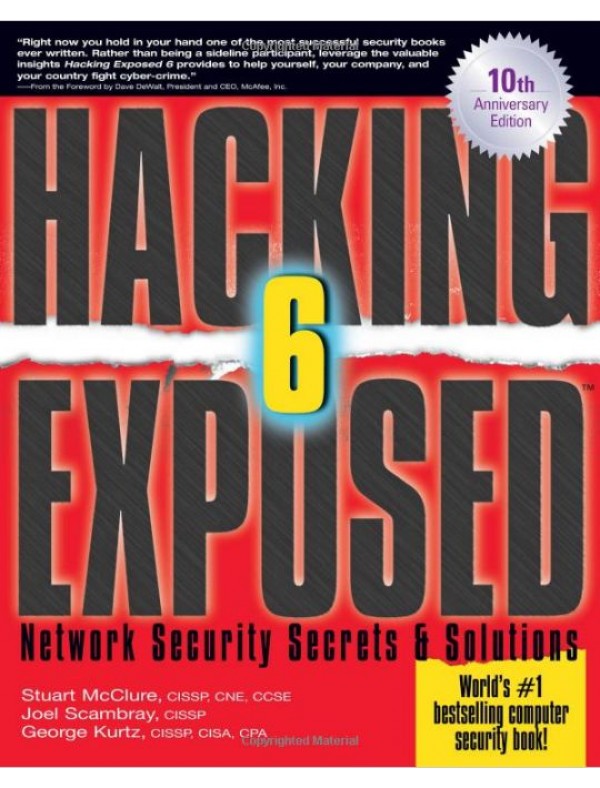 Автор: Stuart Mcclure, Joel Scambray and George Kurtz
Издание: 2009
Страници: 720
Microsoft has finally decided to publicly support network security in Windows XP, a new area covered in the third edition of bestseller, Hacking Exposed. Other new coverage includes attacks on 802.11 wireless networks. But despite details of recent high-profile worms such as Code Red, most of the material is carried over pretty well unchanged from earlier editions.
The guts of Hacking Exposed remain devoted to explaining operating systems, switch and network vulnerabilities--used by the bad guys to get in--and how to remove them. The solutions--apart from the material on social engineering--can require an understanding of network and operating system protocols, user privileges, validation, encryption, file systems and other arcana--though the explanations supplied are detailed enough for the interested user to understand and apply firewalls, security patches, effective authentication and other effective security measures. The book is supported by a Web site with useful network analysis and other tools you can use to investigate and harden your own systems.
Hacking Exposed remains one of the most accessible books available on network security and the latest version is excellent. However, while new vulnerabilities continue to be found the basics remain the same. If Hacking Exposed were software the third edition would be a free upgrade for registered users. Even so, it should be compulsory reading for sysadmins everywhere. --Steve Patient --This text refers to an out of print or unavailable edition of this title.
Product Description
The world's bestselling computer security book--fully expanded and updated
"Right now you hold in your hand one of the most successful security books ever written. Rather than being a sideline participant, leverage the valuable insights Hacking Exposed 6 provides to help yourself, your company, and your country fight cyber-crime." --From the Foreword by Dave DeWalt, President and CEO, McAfee, Inc.
"For security to be successful in any company, you must ‘think evil' and be attuned to your ‘real risk'...Hacking Expose 6 defines both." --Patrick Heim, CISO, Kaiser Permanente
"The definitive resource to understanding the hacking mindset and the defenses against it." --Vince Rossi, CEO & President, St. Bernard Software
"Identity theft costs billions every year and unless you understand the threat, you will be destined to be a victim of it. Hacking Exposed 6 gives you the tools you need to prevent being a victim." --Bill Loesch, CTO, Guard ID Systems
"This book is current, comprehensive, thoughtful, backed by experience, and appropriately free of vendor-bias-prized features for any security practitioner in need of information." --Kip Boyle, CISO, PEMCO Mutual Insurance Company
"The Hacking Exposed series has become the definitive reference for security professionals from the moment it was first released, and the 6th edition maintains its place on my bookshelf," --Jeff Moss, Founder of the popular Black Hat Security Conference
Meet the formidable demands of security in today's hyperconnected world with expert guidance from the world-renowned Hacking Exposed team. Following the time-tested "attack-countermeasure" philosophy, this 10th anniversary edition has been fully overhauled to cover the latest insidious weapons in the hacker's extensive arsenal.
New and updated material:
New chapter on hacking hardware, including lock bumping, access card cloning, RFID hacks, USB U3 exploits, and Bluetooth device hijacking
Updated Windows attacks and countermeasures, including new Vista and Server 2008 vulnerabilities and Metasploit exploits
The latest UNIX Trojan and rootkit techniques and dangling pointer and input validation exploits
New wireless and RFID security tools, including multilayered encryption and gateways
All-new tracerouting and eavesdropping techniques used to target network hardware and Cisco devices
Updated DoS, man-in-the-middle, DNS poisoning, and buffer overflow coverage
VPN and VoIP exploits, including Google and TFTP tricks, SIP flooding, and IPsec hacking
Fully updated chapters on hacking the Internet user, web hacking, and securing code